After four decades in the industry, glam-rock goliaths Kiss have announced their retirement from touring, but they plan to go out with a bang and they're bringing their One Last Kiss: End of the Road Tour to Hersheypark Stadium on Wednesday 21st August 2019! One of the best-selling bands of all time, the iconic group will be performing all the hits and fan favorites from their incredible career, and will be pulling out all the stops for a show that will well and truly rock your world! 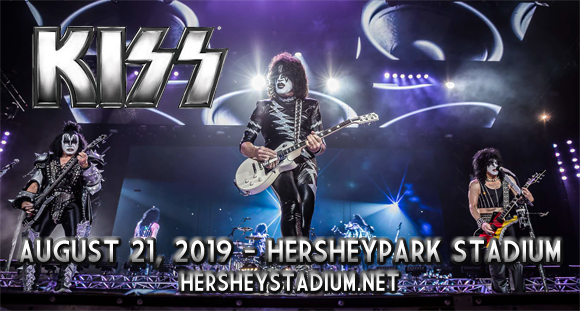 Kiss is an American glam rock band formed by Paul Stanley, Gene Simmons, Peter Criss, and Ace Frehley in New York City in 1973. Having gained recognition for their live shows, which involved bold face paint, bombastic clothing and a penchant for pyrotechnics, the group released its self-titled debut album in 1974, but it was their third studio album, Alive!, that brought the band recognition. Now, Kiss is one of the best-selling bands of all time, having sold more than 100 million records worldwide, including 25 million RIAA-certified albums. Seeking change, the group eschewed its signature make up and clothing from 1983 – 1995, but in 1996 the original line-up reunited and they began to perform in full costume again. In 1999, the band was inducted into the Hollywood Walk of Fame in 1999, and the Rock and Roll Hall of Fame in 2014.