The boys are back in town! Oh yes, after six years apart, Jonas Brothers have reformed and they're coming to Hersheypark Stadium on Saturday 31st August 2019 on the Happiness Begins Tour, promoting their brand new album of the same name! Join Joe, Kevin and Nick for a thrill-a-minute reunion show with hot new material, as well as fan favorites, plus Bebe Rexha and Jordan McGraw in support! 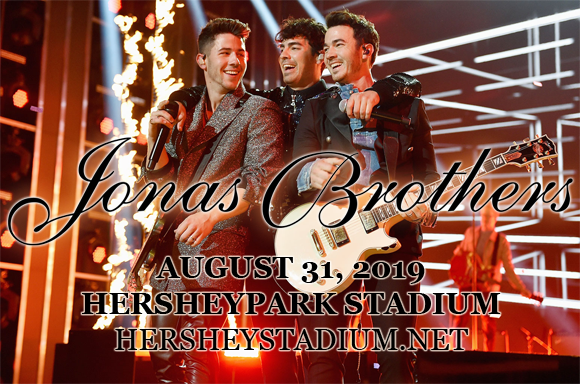 Formed in 2005 by siblings Joe, Kevin and Nick Jonas, pop rock band Jonas Brothers has sold over 17 million albums worldwide to date. Debuting in 2006 with the release of their first studio album, It's About Time, the band came to prominence with their second studio album, Jonas Brothers, which reached number five on the Billboard 200 in its first week. Their popularity only grew when the brothers starred in Disney's 2008 film Camp Rock, and that same year they were nominated for the Best New Artist award at the 51st Grammy Awards and won the award for Breakthrough Artist at the American Music Awards. 2008 also saw release of the trio's third studio album, A Little Bit Longer, and they also co-wrote and co-produced Demi Lovato's 2008 album, Don't Forget. The group released its fourth studio album, Lines, Vines and Trying Times, in 2009, debuting at number one on the Billboard 200. After a hiatus in 2010 and 2011 to work on individual projects, the group reconvened in 2012 only to disband in 2013. After six years apart, Jonas Brothers reformed in February 2019, and on March 1, they released a new single, "Sucker", which debuted at number one on the Billboard Top 100. Happiness Begins, their fifth studio album, is released on June 7, 2019.