Get ready to see one of the biggest pop icons in the world!! The youngest Jackson sibling is back on the road with her show-stopping State Of The World Tour – get ready for the show of your life!! She’s gracing the Hersheypark Stadium stage on Friday 20th July 2018 – get your tickets to see her NOW while they last, because they won’t for very long!! 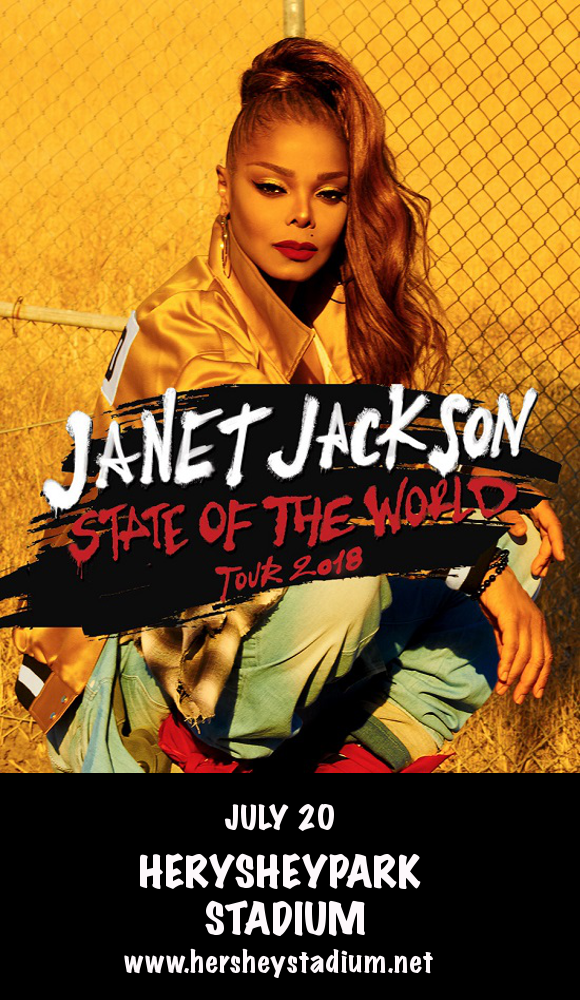 Few pop artists can lay claim to the vast scope and influence of the likes of superstar Janet Jackson. The youngest of the prodigious Jackson family, she was in showbiz since she was a child, and released her debut self-titled album in 1982. Influenced by her brothers Jermaine and Michael, as well as artists including Joni Mitchell, Lena Horne, and Tina Turner, Janet Jackson developed a unique musical style over the years, fusing every genre from funk to R&B and incorporating electronic elements to create a sound that was truly new and progressive.

Her immense catalog of work has earned her multiple Grammy Awards and Emmy Nominations in addition to a Golden Globe Award, an Academy Award nomination and countless American Music Awards, MTV Video Music Awards and Billboard Music Awards. With sales of over 100 million records, and numerous artists citing her as inspiration, today, she is one of the best-selling and most influential artists of all time!

No Janet Jackson fan can afford to miss what promises to be an astounding show at the Hersheypark Stadium – don’t delay, get your tickets today!!