Hella Mega Tour comes to Hersheypark Stadium on Sunday 16th August 2020! An insane show that sees full sets from Green Day, Fall Out Boy and Weezer, and support from The Interrupters, Hella Mega Tour is 100% unmissable! The tour also brings the opportunity for each band to bring brand new material to the stage:

“It’s exciting, you know? But I mean I really kind of look forward to maybe actually putting out more music. I think just we finished our record contract… we’re free agents. So we’re just going to end up putting out more stuff. We’ll probably put out more stuff before the tour actually. And then I think not tour as long, but effective touring,” says Green Day's Billie Joe Armostrong. 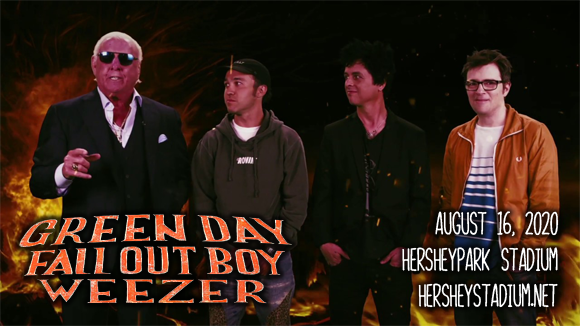 A throwback to the infamous Monsters of Rock Tour, the Hella Mega Tour sees three behemoths of modern alternative rock – Green Day, Fall Out Boy and Weezer – come together for a joint headliner that will blow any rock fan's mind! A super stacked line-up of legendary bands who dominated the airwaves for the MTV generation, the Hella Mega Tour is a must-see, once in a lifetime touring show that will go down in the annals of punk rock history!